Financial reporting frauds (also called management frauds) have become endemic, with huge losses being inflicted upon shareholders, creditors and others.  Some of the most infamous frauds of the past two decades – Enron, WorldCom, Satyam, Olympus, Toshiba, and Parmalat being a small sample – have implicated the same key concerns.  These include:  the deviant “dark triad” personalities of “C-suite” executives; failures by outside independent auditing firms; and gross inattention by those charged with corporate governance, the board of directors or audit committee members.  The failure of corporate governance is of concern for the following brief narrative.

Examples of corporate governance in action. There is not a one-piece fits all scenario, and frameworks may vary on the type of business/operational risk(s) experienced by the entity.

Corporate governance is a set of rules, practices and processes used to direct and control a company. It involves balancing the interests of a company’s stakeholders such as management, shareholders, suppliers, customers, financiers, government and the community. Moreover, it is essential for the success and sustainability of the business over a period of time. When the set of rules and processes that form the governance mechanism of a firm are ineffective or fail, it can have disastrous consequences for a business.

For public companies, a board of directors (some or all of whom must generally be independent of management) is the primary body responsible for governance, and discharging that duty requires an active and engaged group of business- and financial reporting-savvy individuals.  Some of the most notorious frauds have occurred at entities having boards made up of well-known or prominent persons – even former highly-positioned governmental leaders – who were seemingly solicited for the sole purpose of providing “window dressing” to assure stakeholders regarding the respectability of the promoters.  Such directors were commonly allowed or even encouraged to give little or no real attention to the operations of the businesses they ostensibly are overseeing.

For one example, the board overseeing Lord Conrad Black’s newspaper empire included, among other luminaries, a highly-respected former Illinois (USA) governor and the fashion-designer wife of a top private equity fund founder.  One of the board meetings (of this US-based company) was actually held in the then-British prime minister’s residence, where a ceremonial luncheon took precedence over business discussions, all designed to keep the star-struck board members from delving into the mundane financial data or operational decisions of the management, some of whom were later convicted of criminal offenses.  At trial, many of the heedless board members claimed to have merely “skimmed” the company’s fraudulent financial information, and this prompted a news report facetiously urging the creation of a new Olympic sport, “synchronized skimming.”  Needless to say, those neglectful board members were not invited to serve on other companies’ boards, and their respective careers went into eclipse. 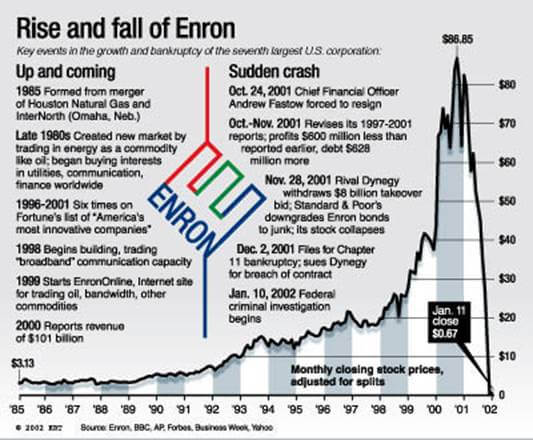 In 2001, the Enron collapse was a seminal moment in the financial world, highlighting the importance of accounting and corporate governance.

In another case (Enron), the board and its audit committee even included a highly respected auditing expert – a longtime college professor and textbook author – as well as other prominent individuals.  Here too, the “honor” of service on the board of a top corporation (according to the famed Fortune 500 listing, the seventh largest shortly before massive fraud was uncovered) dazzled those directors, and this, coupled with the apparent skills of, and aura of mystique attributed to, the company’s top management, served to mesmerize those board members so that they totally abdicated their duties.

Governance failures don’t evolve overnight, and there are several warning signs that need to be noted in order to avoid such failures.  These often are found to include:

In some jurisdictions legislation has been enacted, such as the Sarbanes-Oxley Act of 2002 in the U.S., which has been designed to prevent governance failures by increasing the exposure of errant directors to civil and even criminal liability.  For example, in the U.S., board members must obtain so-called “certifications” from the CEO and CFO regarding the absence of fraud and the effectiveness of internal controls over financial reporting functions.  These requirements largely rely on an interesting psychological phenomenon: that many would-be criminals will hesitate when asked to formally acknowledge their probity, even as they demonstrate little aversion to spoken falsehoods to board members, auditors and even government overseers.

The widely-reported US$1.47 billion failure of Indian computer services giant Satyam in 2009 is one example of a large-scale, long-running financial reporting fraud (and asset theft) that implicated not only audit failure, by renowned international firm PwC, but also gross neglect of duty by the board of directors.

Satyam (ironically, the Sanskrit word for “truth”) had been cited as an example of India’s growing business sophistication and success.  The company had even won numerous awards for innovation, governance, and corporate accountability. In 2007, accountants Ernst & Young had named Satyam CEO Raju the “Entrepreneur of the Year,” and in 2008, MZ Consults cited Satyam for being a leader in India in terms of corporate governance and accountability.  Later in 2008 the World Council for Corporate Governance awarded Satyam the Global Peacock Award for global excellence in corporate accountability. Less than five months later, Satyam was revealed to have perpetrated a massive multi-year accounting fraud.

Satyam was found to have violated many fundamental rules of corporate governance, including: not distinguishing the roles of board and management; failed separation of the roles of the CEO and chairman; weak appointments to the board; excessive directors’ and executives’ compensation; and inadequate protection of shareholders rights.  In reaction to the revelations in 2009, legislation and regulations in India were enacted and adopted to, inter alia, alter procedures for the appointment of independent directors, enhance certain disclosures such as of pledged securities, require adoption of IFRS (although, as is the case in most frauds, the fault was not associated with which financial reporting standards were used, but rather in the proper adherence to any such standards), and the creation of a new corporate code by the Indian Ministry of Corporate Affairs.

In the author’s experience, and consistent with the observation that “hindsight is 20-20 vision,” most frauds, once revealed, are indeed found to have been rather obvious, and should have been readily uncovered, if not actually prevented, by properly functioning mechanisms of corporate governance.  For example, for many of the headline cases (Enron, WorldCom, and Parmalat — all of which were personally studied by the author — and Satyam, Olympus and Toshiba, among many others), transactions and/or account balances that strained credulity should have been challenged by board members, which would have surely truncated the fraud and resulted in management changes.

Even today, collapse of large multi-national companies are not uncommon. Though the system is not perfect, lessons like these help us progress towards the future.

For example, Satyam claimed to have cash balances of Rs. 3,983 crore (equivalent to over US$620 million) in bank accounts, certainly an odd circumstance.  To be fair, Satyam also fabricated interest income purportedly flowing from these balances, and this would comfort those who might have otherwise found holding such funds in non-interest-bearing accounts inexplicable (although the fictitious interest resulted in large and growing balances of receivables that could never be collected, which should have been a “red flag”).  Neither the board nor the auditors sought independent confirmation of the existence of these accounts.

Similarly, Parmalat (at $18 billion, the biggest financial reporting fraud to date) claimed huge sales of milk purportedly acquired in Singapore (a city-nation having few if any farms) and then sold to the state food agency in Cuba.  Management assuaged the auditors’ and board’s curiosity by asserting that the (Communist) Cuban government would never respond to (capitalist nations’) requests for confirmations of transactions or balances, and the auditors simply skipped that normally mandatory audit procedure.  In short, there was a total suspension of disbelief by board members (and auditors), which directly led to perpetration or continuation of these outrageous frauds, which would have been “nipped in the bud” had anyone with responsibility for oversight been alert to these glaringly obvious anomalies.

Board service, which in the past has been treated as a mere honorific, must be understood as being a serious and substantive engagement, constituting the first line of defense against corporate fraud.  Only those willing to discharge the attendant obligations with emotional and intellectual energy need apply! 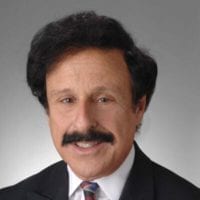 Barry Jay Epstein, Ph.D., CPA
Dr. Barry Epstein is a practicing accountant and frequent expert witness who works extensively with securities attorneys and U.S. regulatory agencies on a variety of cases. Dr. Epstein was the author of The Handbook of Accounting and Auditing (RIA, Thomson Reuters) from 1988 to 2013. He served as the lead author of 26 annual editions of Wiley GAAP (1985 through 2010), 14 annual editions of Wiley IFRS (1997 through 2010), and several other works on U.S. GAAP and international accounting standards, all published by John Wiley & Sons.
web
http://epsteinnach.com
email
bepstein@epsteinnach.com
×

Barry Jay Epstein, Ph.D., CPA
Dr. Barry Epstein is a practicing accountant and frequent expert witness who works extensively with securities attorneys and U.S. regulatory agencies on a variety of cases. Dr. Epstein was the author of The Handbook of Accounting and Auditing (RIA, Thomson Reuters) from 1988 to 2013. He served as the lead author of 26 annual editions of Wiley GAAP (1985 through 2010), 14 annual editions of Wiley IFRS (1997 through 2010), and several other works on U.S. GAAP and international accounting standards, all published by John Wiley & Sons.
web
http://epsteinnach.com
email
bepstein@epsteinnach.com
Latest Posts

Dr. Barry Epstein is a practicing accountant and frequent expert witness who works extensively with securities attorneys and U.S. regulatory agencies on a variety of cases. Dr. Epstein was the author of The Handbook of Accounting and Auditing (RIA, Thomson Reuters) from 1988 to 2013. He served as the lead author of 26 annual editions of Wiley GAAP (1985 through 2010), 14 annual editions of Wiley IFRS (1997 through 2010), and several other works on U.S. GAAP and international accounting standards, all published by John Wiley & Sons.
The Professional.