Asset-tokenization is the one-to-one mapping between physical assets or digital assets and the digital certificates generated by blockchain. Examples of assets include commercial buildings, hotels, houses, stocks and financial securities, digital collectables, intellectual property and works of art and this list is by no means exhaustive. If you are a resort developer contemplating a blockchain-based shared ownership offering, then let’s assume that you have a large resort development and that you are prepared to test a blockchain-based product with a first Phase of say, twenty identical two-bed Apartments for the initial tokenization exercise.

“Tokenization” is the term used for the process which converts rights relating to an asset into a digital token.  Let’s assume also that each Apartment is projected to generate $1m in revenue from the sale of 50 weeks. The $1m revenue target is simply an assumption here which, in this example, is unrelated to the actual product cost – [“product cost” meaning the cost of land, construction, soft costs and all F.F. & E. costs]. This example conveniently provides us with a retail price equivalent to $20,000 per week.

The tokenization of these twenty apartments, whereby they are notionally converted into 20,000 tokens, would mean that each token a nominal value of $1,000 so that each week would be worth 20 tokens. The Developer’s next step is to issue the tokens on a blockchain platform supporting smart contracts, for example on Ethereum, so that the tokens can be freely bought and sold on different exchanges. When a Purchaser buys 20 tokens, he acquires the rights to a week of usage as well as acquiring 0.1% of the ownership in the asset, depending upon the type of product structure adopted.

There could be variations within the Shared Ownership Offering whereby the token had a predetermined life or set term of say 20 or 25 years, after which the tokens expire, and the ownership of real estate asset reverts to the Developer. Alternatively, the product rules could prescribe that the physical assets are to be sold or “monetized” after a set term and the net proceeds of sale distributed according to the number of tokens held by each individual buyer.

Many variations are feasible including the breaking down of the token values so that they equate to entitlements to individual nights of annual usage, rather than weeks, as may better suit an urban-type resort development. It will also be vital to ensure that Investors have an ongoing obligation to pay annual dues for the operation and ongoing maintenance of the physical assets.

Because Blockchain is a public ledger that is immutable, it ensures that once a Purchaser buys tokens, nobody can “erase” that purchaser’s ownership even if it is not registered in a government-run registry. In the example above, we have taken some real estate assets, tokenized them and created their digital representation which lives on Blockchain. Blockchain guarantees that the ownership information is immutable.

Centralization or additional security could be provided by having the fractional ownership blockchain overseen by a specialist Administrator, acting rather like a trustee and Asset Manager with clearly defined duties and obligations relating to the way the physical assets are held or otherwise secured, to deliver the required product integrity. There are several options available to achieve the desired objectives.

How do you get to market?

Innovative technology start-ups require funding but opportunities to access conventional funding channels for their finance are frequently limited and often regulated. An ICO enables these start-ups to create a currency or token representing their offering ahead of soliciting people to buy into this idea by purchasing the tokens.  Blockchain technology enables the token to be bought or sold with the consideration being calculated by reference to the buyers’ perceptions of the value or perhaps the uniqueness of the underlying concept, always assuming that there are people willing to trade so as to create a viable market.

An ICO (or Token Sale) is the process by which funds can be raised for a venture by the sale of tokens representing the idea. Investors buy the tokens linked to the idea in exchange for fiat currency or other Crypto.  The structure of the ICO will usually be explained in a presentation to prospective investors known as a “White Paper”.

The White Paper should set out whether investors can resell their token and, if so, whether there are any limitations on their ability to do so. Even if they can resell, investors should be mindful that the contents of the White Paper and these virtual currency exchanges are not themselves regulated. Accordingly, investors do not have the same protections that would apply in the case of shares listed on regulated (or stock market regulated) exchanges, making ICOs a potentially risky investment.

The White Paper sets out full details of the project.  White papers have commonly been made available on the online communities of Crypto investors, such as Bitcoin Talk, Reddit and others and the White Paper should contain an executive summary detailing the purpose of the ICO project as well as the technical details of the token and the underlying project. The usage and transferability of the token will be discussed and the timetable for the ICO will usually be set out. The aim of the White Paper is to encourage interest amongst prospective investors in the ICO by explaining why the token(s) they buy may gain value through the ICO project.

Once announced,  the ICO project team will set out the terms of the ICO, namely a description of the transaction, life-cycle, target investment amount and project deadlines The offer will also confirm the token name that is to be traded and what currencies (Crypto or Fiat) are accepted. This process is then supported with a marketing campaign to seek investors ahead of the ICO completing with the sale of the tokens. 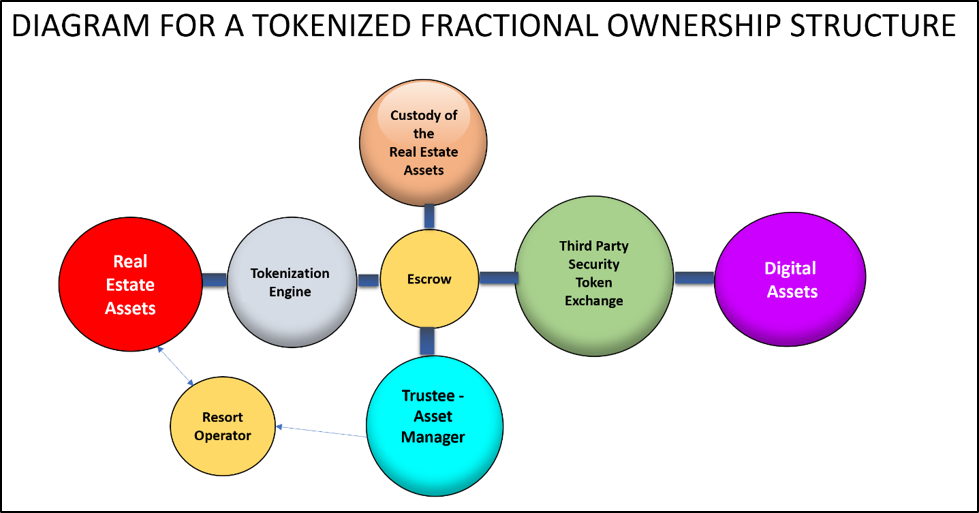 The White Paper is the ICO equivalent of a Prospectus which is published when launching a more traditional IPO. However, one of the difficulties of a White Paper is that there is currently no standard, universal structure, or best practice when it comes to its contents.

In early October, 2018, the ownership group behind the St. Regis Aspen announced the selling off of 18.9 percent of the resort hotel through $18 million in digital tokens. The digital currency, called Aspen Coins, could be purchased with U.S. dollars as well as Bitcoin and Ether. Buyers of the tokens, sold at $1 each through a real estate offering called Aspen Digital, had to be accredited investors willing to purchase at least 10,000 tokens. New York-based asset manager Elevated Returns, which owns the St. Regis, held onto the remaining 81.1 percent of the 179- room luxury hotel.

Beside St. Regis Aspen Resort itself, there were multiple participants involved in this STO process. The diagram below sets out the various relationships.

This was the first recorded example of an IPO of this kind within the USA involving the tokenizing of a luxury hotel asset. The St. Regis Aspen Resort property itself is a world class, year-round destination resort.

In Switzerland, a Company by the name of Blockimmo is leveraging blockchain technology, where fractional ownership of real estate is made possible by tokenizing the asset, through smart contracts. Additionally, a number of Tokenization Platforms have also launched to offer the process to Real Estate developers and investors.

Further articles will examine the benefits and risks associated with Blockchain as well as the current international regulatory climate and provide some conclusions regarding the technology.