The Great Crypto Crash of 2018 looks more and more like one for the record books.

As virtual currencies plumbed new depths on Wednesday, the MVIS CryptoCompare Digital Assets 10 Index extended its collapse from a January high to 80 percent. The tumble has now surpassed the Nasdaq Composite Index’s 78 percent peak-to-trough decline after the dot-com bubble burst in 2000. 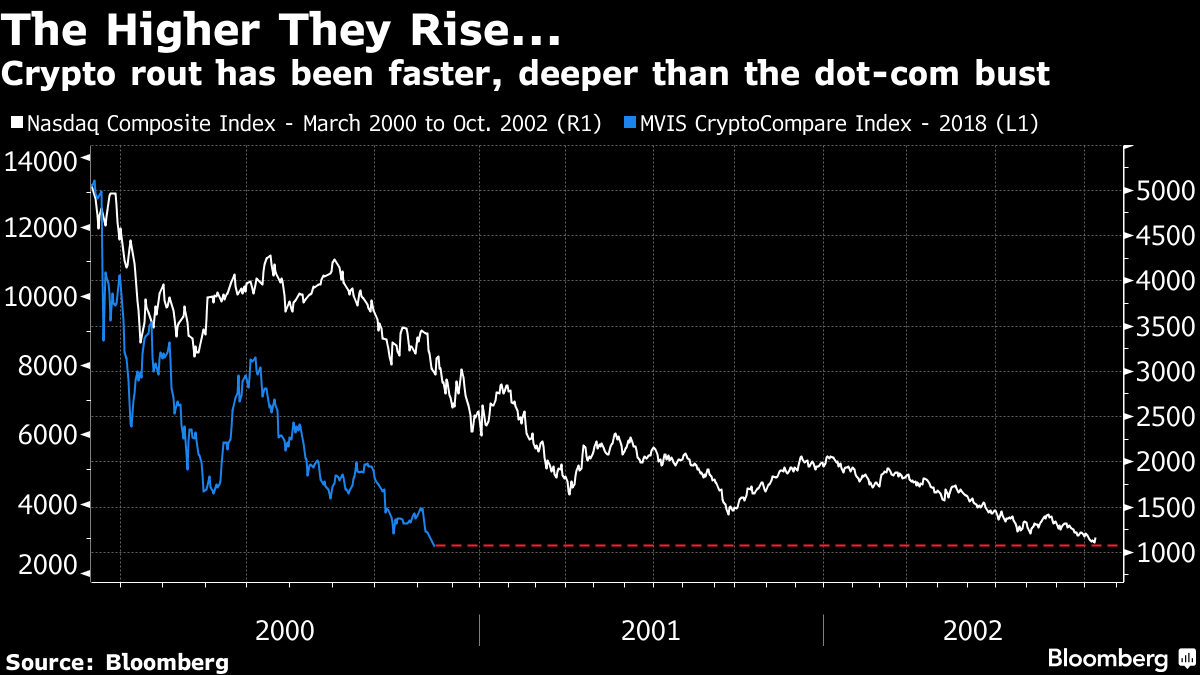 It only took a third of the time and bitcoin has plunged to an all time low-lower than the dotcom bubble more than a decade ago.

Like their predecessors during the Internet-stock boom almost two decades ago, cryptocurrency investors who bet big on a seemingly revolutionary technology are suffering a painful reality check, particularly those in many secondary tokens, so-called alt-coins.

“It just shows what a massive, speculative bubble the whole crypto thing was — as many of us at the time warned,” said Neil Wilson, chief market analyst in London for Markets.com, a foreign-exchange trading platform. “It’s a very likely a winner takes all market — Bitcoin currently most likely.”

Wednesday’s losses were led by Ether, the second-largest virtual currency. It fell 6 percent to $171.15 at 7:50 a.m. in New York, extending this month’s retreat to 40 percent. Bitcoin was little changed, while the MVIS CryptoCompare index fell 3.8 percent. The value of all virtual currencies tracked by CoinMarketCap.com sank to $187 billion, a 10-month low.

The virtual-currency mania of 2017 — fueled by hopes that Bitcoin would become “digital gold” and that blockchain-powered tokens would reshape industries from finance to food — has quickly given way to concerns about excessive hype, security flaws, market manipulation, tighter regulation and slower-than-anticipated adoption by Wall Street.

Crypto bulls dismiss negative comparisons to the dot-com era by pointing to the Nasdaq Composite’s recovery to fresh highs 15 years later, and to the internet’s enormous impact on society. They also note that Bitcoin has rebounded from past crashes of similar magnitude.

But even if the optimists prove right and cryptocurrencies eventually transform the world, this year’s selloff has underscored that progress is unlikely to be smooth.

One silver lining of the crypto slump is that ramifications for the global economy are likely to be minimal. While the market has lost more than $640 billion of value since peaking in January, that’s a far cry from the trillions erased from Nasdaq Composite stocks during the dot-com bust.

The crypto industry’s links with the traditional financial system also remain weak. That’s been a disappointment for bulls, but it’s good news for everyone else at a time when digital assets are tumbling.

“Until you can pay your taxes in cryptos, it’s just a pointless investment vehicle,” said Markets.com’s Wilson. “Some people will make loads of money but most won’t.”